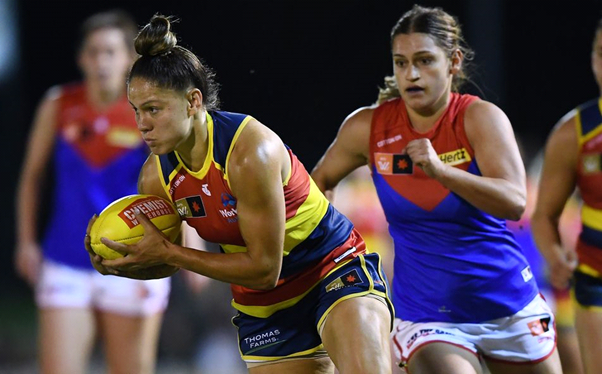 Rapid Shift: How To Work On Your Agility Like An AFLW Pro

Agility, the ability to rapidly shift our body’s position, is imperative to being a gun footy player. You have to be able to pivot, switch, turn and go at a moment’s notice, especially as the ball switches directions so rapidly on such a massive oval!

Without agility we run the risk of falling behind the gameplay, losing out to an opponent who can quickly turn and go after the footy with a moment’s notice and an extra metre on you.

With this in mind, we have compiled a list of four drills to work on your agility like an AFLW football pro!

Let’s check them out below:

Grab two different coloured balloons and choose the order in which you will touch them (i.e. red then yellow). Either with a partner or solo, hit the balloons in their chosen order whilst keeping them in the air, ensuring they don’t hit the ground as you chase them around the space.

You can make this more challenging by performing a bodyweight squat in between each balloon touch, you can even do a burpee if you’re up to the challenge! This is truly a great drill for switching directions quickly and with plenty of body strength, ensuring that you are always ready to move and chase the ball at a millisecond’s notice.

Grab an agility ladder (your club should definitely have one on-hand), and choose a method of running across the ladder. For example, you might try a knee-high run through across it, before giving the lateral scissor a shot. For upper body agility work, try moving up and down the ladder using your hands and staying in a push-up position. This is a little more on the advanced side, so don’t be disheartened if you’re not a pro at it the first time around!

Choosing either six or 12 inch hurdles, they don’t have to be hurdles, and could also be yoga blocks, cones or something completely different!) place around 10 of the hurdles in a row and parallel to one another. Move laterally and go over the first hurdle with a high step before pausing in a stork stance and then go back to the start.

Then go over the next two hurdles, pausing before returning to the start position. Keep going through the same motions until you reach the end of all 10 hurdles in a pattern as follows: 1, 12, 123, 1234 etc.). Remember to count the hurdle numbers out loud and pause on each leg before going back to the start, eventually removing the pause altogether when you become more advanced.

Grab some agility balls and bounce them against a wall or with a partner if you’re doing solo work. Because the agility ball shape will send the bounce in multiple directions, you should choose a safe spot where you won’t run the risk of running into a person or another object.

Practise catching the ball with both hands, then with your stronger hand and, lastly, your weaker hand. This may seem like a bit of a random drill for agility, but it’s great for AFLW football as it increases your hand-eye coordination whilst having you chase around a small object which is obviously good for leg strength and cardiovascular endurance.

These four drills are the ultimate in agility work. Add these to your footy training program and you will be taking your overall game to new heights through this imperative physical attribute!

A Guide to Dental Implants: Everything You Need to Know

Maintaining a Healthy Diet During Chemotherapy

Maintaining a Healthy Diet During Chemotherapy